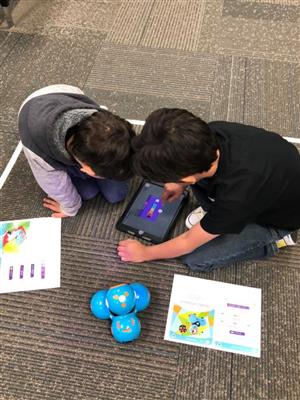 At some point between reading, science, writing, math, and social studies, students from Kindergarten to fourth grade have the chance to release the robots. The classroom transforms into a Wonder Workshop with 10 “Dash and Dot” robots who help students code and bring them to life. Dash responds to voice commands, navigates objects, dances, sings, and can play the xylophone with his buddy, Dot, following close behind.

The program was started in 2018 by Lara Paretti, the school’s computer paraprofessional, who was awarded a grant from Wylie ISD Education Foundation to fund “Bee… Bop… Bot… with Dash and Dot (Robotics and Coding),” a program that allowed her students to learn the basics of robotics and coding in a fun, innovative way.

“They couldn’t wait to get to computers,” Paretti said. “To most of the kids here, they’ve never had these experiences, and they probably never will unless it’s through education. It’s exhilarating to be the person that gave them that opportunity.”

Despite having spent nearly a decade working in insurance, Paretti always loved tech and trying to figure out how things worked. She had been a girl scout when she was younger, and her family is full of engineers. So, when Paretti was offered a position to teach computers at Hartman, she couldn’t turn it down. She has loved every day she has been at Hartman since joining in 2017 and has always tried to find new, engaging ways to pique her students’ interest in STEM.

Paretti spent the summer of 2018 working on her grant application for the Wylie ISD Education Foundation, a nonprofit organization committed to enhancing educational opportunities in Wylie Independent School District. She was intimidated and unsure of where to start, but after spending hours researching ways to encourage students to like STEM, she determined Dash and Dot robots were an effective way to show students what the future could look like. When applying, she asked herself, “why not? It truly comes down to just a few hours to make a difference in a kid’s life. These are things we can’t provide on our own, and to give them the opportunity to do it, it’s worth it. I loved it.”

A 2019 study by Purdue University (1) found that utilization of robots in education “allows for an integrated, multi-disciplinary approach that incorporates technical and social topics. This approach encourages students to build mental connections and associations with the breadth of engineering, physics, and mechanistic concepts.” This is precisely what Paretti wanted to accomplish. Through robots, she was able to teach her classes – all filled with students of diverse backgrounds – the fundamentals of STEM.

“A lot of students didn’t know what STEM was. They’ve never experienced anything like it,” said Paretti. “I’m hoping this is life-changing for even just one kid. When they get to pick their endorsements in high school, maybe one student will look back and remember the robots in Mrs. Paretti’s class.”

Students of all ages and backgrounds can learn the basics of robotics and coding through the Dash and Dot Robots. Special needs classes across the world have used robots to help students build their social skills, and Paretti’s program is no different. She assigned two students per robot and was very intentional when pairing partners. So much so that she spoke with teachers throughout the school to see if they agreed on pairings. Paretti wanted to set all of her students up for success so they would feel encouraged and inspired about STEM. Her careful planning paid off as her special needs students excelled alongside the rest of the class.

For Paretti, the robots are not only a way to teach kids about technology, but also a way to tackle traditional concepts by creating and exploring. She’s used virtual reality, Legos, magna tiles, and iPads to spark and grow their interest.

“I hope I can give at least one kid that big moment in their life. The moment they realize they love STEM,” said Paretti.

Written by Krisleigh Hoermann, Board Member, and friend, Beth Rose.