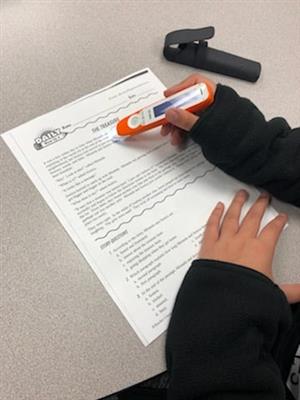 October is National Dyslexia Awareness Month. Dyslexia is a learning difference associated with reading, writing and spelling.  An unexpected cheer-worthy encounter inspired me to share what feels like a big win.

Last academic year Mrs. Allyson Palmer, a Dyslexia Therapist at Cox Elementary, was awarded ten C-Pens through Wylie ISD Education Foundation’s Grants for Teachers program.  C-Pens scan the words on a display and read them aloud for the user. A headset can be used to not distract other students.  This pen lets challenged readers work independently and often allows them to remain in class not losing out on instructional time.

Standing on the sidelines of my son’s team competition another mom and I discussed the challenges of rearing teen boys. An hour was easily consumed by this commiserating when she said, “But I’m really worried about my second grader.”  Understanding the weight of a worried heart, I followed up with a dozen questions. A solution came to mind and with a single text to the right person, her son to gained access to a resource that could potentially support his learning.

The morning after our sideline conversation Mrs. Palmer had a C-Pen in the hands of the specialist at this struggling reader’s campus.  The C-Pen adjusted how the second grader reader was tested and changed his approach to reading. The previous frustration of difficulty reading and low comprehension were superseded with the confidence that comes from doing well. “His first experience in using a C-Pen was for a science test which would have been read to him by his teacher. This day he was able to complete the test on his own with the C-pen,” his mom said. “He scored a 100 percent. He was overjoyed and so proud of himself. His confidence instantly improved and his teachers saw the difference right away.”

Dyslexia is a print disability but it also impacts many other areas of reading. The grant evaluation showed improvements as well as intangible results equally valuable. “In addition to supporting confident readers, access to the C-Pen devices allowed teachers to reduce their time reading with my students and increase time for learning,” Mrs. Palmer said. “I couldn’t put a number on the independence my students gained, the self-confidence they developed, and the love of reading that many developed.”

Once again standing on the sidelines of yet another of my son’s team competition, mom and I cheered together the success of her young son’s renewed enthusiasm for school.  He was there rooting on his big brother alongside us.  I didn’t want to make an embarrassing fuss so all I asked was, “How’d it feel to show off what you know about science?” He leaped and squealed with the energy of a second grade boy. Words were not necessary. The playing field of learning finally felt level for him and he now could enter the stadium of education feeling hopeful for the first time in a long time.

For more on Dyslexia > About Dyslexia